“Here Comes Treble” is the fifth episode of the ninth season of the American comedy television series The Office. The episode originally aired on the National Broadcasting Company on October 25, 2012. It guest stars Stephen Colbert as Andy’s college friend Broccoli Rob and Ben Silverman as an investor.

The series depicts the everyday lives of office employees in the Scranton, Pennsylvania branch of the fictional Dunder Mifflin Paper Company. In the episode, Andy Bernard invites his old college a cappella group, Here Comes Treble, to perform for the office during Halloween. Andy, however, gets angry when he hears that his college friend Broccoli Rob is telling a different story about the group. Meanwhile, Dwight Schrute, with the help of Nellie Bertram tries to track down a person who is using prescription anxiety pills. Jim and Pam Halpert fight over his new job.

The title is a reference to Andy’s college a cappella group, which had previously been alluded to in the series, but never actually shown. The episode also marked the final Halloween installment for the series. “Here Comes Treble” received mixed reviews from television critics, with many mainly criticizing Andy’s characterization. Others were more complimentary of the episode’s subplots. “Here Comes Treble” was viewed by 4 million viewers and received a 1.9/5 percent rating among adults between the ages of 18 and 49, ranking third in its timeslot. The episode, however, ranked as the highest-rated NBC series of the night. 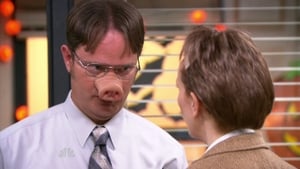