“Livin’ the Dream” is the twenty-first episode of the ninth season of the American comedy television series The Office and the 197th episode overall. It originally aired on the National Broadcasting Company on May 2, 2013. The episode guest stars Michael Imperioli as Sensei Billy, and was initially scheduled to air in its half-hour timeslot, before being expanded to a full hour.

The series—presented as if it were a real documentary—depicts the everyday lives of office employees in the Scranton, Pennsylvania, branch of the fictional Dunder Mifflin Paper Company. In the episode, Andy Bernard decides to pursue a career as a professional actor, and quits his job at Dunder Mifflin. Meanwhile, Dwight Schrute finally receives his black belt in karate from his new sensei and, on the recommendation of Jim Halpert, is promoted to Regional Manager of the Scranton branch. Jim reconnects with Pam Halpert, and makes it clear that he will choose her over Philadelphia.

The episode was viewed by an estimated and received a 1.8/5 percent share among adults between the ages of 18 and 49, ranking third in its first half-hour timeslot and fourth in its second, marking a slight increase in the ratings from the previous episode. “Livin’ the Dream” received mostly positive reviews from television critics. Critical praise mainly went towards the dynamic between Jim, Pam and Dwight, particularly for the former two’s reconciliation and the latter’s promotion. Andy’s subplot, meanwhile, received more mixed reviews. 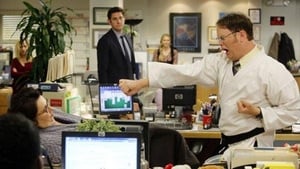