“Junior Salesman” is the thirteenth episode of the ninth season of the American comedy television series The Office and the 189th episode overall. It originally aired on National Broadcasting Company on January 31, 2013. The episode was written by Carrie Kemper and directed by David Rogers. The episode features the return of several guest stars, including Chris Diamantopoulos as Brian the boom mike operator, Michael Schur as Dwight’s cousin, Mose, Mark Proksch as Nate, and several others.

The series—presented as if it were a real documentary—depicts the everyday lives of office employees in the Scranton, Pennsylvania, branch of the fictional Dunder Mifflin Paper Company. In the episode, Dunder Mifflin CEO David Wallace tasks Dwight Schrute with finding a part-time replacement for Jim Halpert; Dwight in turns enlists several of his close friends, including his cousin Mose. Meanwhile, Pam Halpert tries to find out who her new desk mate will be.

The episode received mixed reviews from television critics, with many considering it superior to “Vandalism”, particularly for the lessened presence of Brian. “Junior Salesman” was viewed by 4.45 million viewers and received a 2.1/5% rating among adults between the ages of 18 and 49. Although The Office, ranked third in its timeslot, it ranked as the highest-rated NBC series of the night. 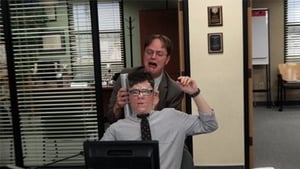