“Suit Warehouse” is the eleventh episode of the ninth season of the American comedy television series The Office and the 187th episode overall. The episode was written by Dan Greaney and directed by Matt Sohn. It original aired on National Broadcasting Company on January 17, 2013.

The series depicts the everyday lives of office employees in the Scranton, Pennsylvania branch of the fictional Dunder Mifflin Paper Company. In the episode, Clark returns from his stint as Jan’s sexual assistant and Dwight Schrute enlists his help; the two pose as a father and son so that they can successfully sell to the owner of a suit warehouse. Darryl Philbin travels to Philadelphia with Pam Halpert to interview at Jim’s new company. Meanwhile, Pam starts to realize that her family may have to leave Scranton.

“Suit Warehouse” received mainly positive reviews from critics. The episode was also viewed by 4.15 million viewers and received a 2.1/5 percent rating among adults between the ages of 18 and 49, ranking second in its timeslot. The episode ultimately ranked as the highest-rated NBC series of the night. 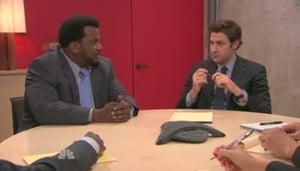