“Mrs. California” is the ninth episode of the eighth season of the American comedy television series The Office, and the show’s 161st episode overall. “Mrs. California” aired on NBC in the United States on December 1, 2011. The episode was written by consulting producer Dan Greaney, marking his first writing credit for the series, and was directed by Charlie Grandy.

The series—presented as if it were a real documentary—depicts the everyday lives of office employees in the Scranton, Pennsylvania, branch of the fictional Dunder Mifflin Paper Company. In the episode, Robert California brings his wife into the office for a job, and tells Andy Bernard behind her back not to give her one which turns disastrous. Meanwhile, Dwight Schrute opens a gym in the building and tries to get Darryl Philbin to join it.

Tierney was brought in to play the role of California’s wife because Showrunner Paul Lieberstein stated that he was “a big fan of hers”. “Mrs. California” received mixed responses from television critics. According to Nielsen Media Research, the episode received 5.74 million viewers and received a 2.9 rating/7% share among adults between the ages of 18 and 49, staying even with the ratings from the previous episode, “Gettysburg”. The episode also ranked at first in its time slot. 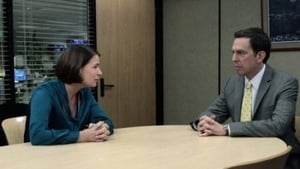