“Gettysburg” is the eighth episode of the eighth season of the American comedy television series The Office. It was written by Robert Padnick and directed by Jeffrey Blitz. The episode aired on the National Broadcasting Company in the United States on November 17, 2011. “Gettysburg” guest stars Lindsey Broad as Cathy Simms.

The series—presented as if it were a real documentary—depicts the everyday lives of office employees in the Scranton, Pennsylvania, branch of the fictional Dunder Mifflin Paper Company. In this episode, Andy Bernard takes some of the office staff on a field trip to Gettysburg for inspiration. Meanwhile, the rest of the office, under orders from Robert California, are tasked with coming up with a new business idea for Dunder Mifflin. Kevin Malone proposes several ideas that catch California’s attention, although they are rather idiotic.

“Gettysburg” would be the last episode to feature Jenna Fischer before she went on maternity leave. The episode received mixed reviews, with commentators mainly criticizing the episode for recycling jokes. According to the Nielsen Media Research, “Gettysburg” drew 5.50 million viewers. Despite this, the episode ranked first in its time slot and was the highest-rated NBC show of the night. 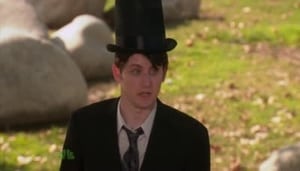