“Pam’s Replacement” is the seventh episode of the eighth season of the American comedy television series The Office, and the show’s 159th episode overall. The episode aired on NBC in the United States on November 10, 2011. It was written by Allison Silverman and was directed by Matt Sohn. The episode guest stars Lindsey Broad and Steve Moore.

The series—presented as if it were a real documentary—depicts the everyday lives of office employees in the Scranton, Pennsylvania, branch of the fictional Dunder Mifflin Paper Company. In the episode, Pam Halpert trains an attractive temporary worker to take her place while she is on maternity leave, and enlists Dwight Schrute’s support when she tries to show that Jim Halpert finds her replacement attractive. Meanwhile, Robert California surprises Andy Bernard, Kevin Malone, and Darryl Philbin when he requests to join their band.

“Pam’s Replacement” relates to Pam’s pregnancy; Fischer was actually pregnant and her pregnancy was written into the series with Pam and Jim having their second baby. The episode received mixed reviews from critics with Myles McNutt from the AV Club calling it one of the “laziest” episodes of the series. According to Nielsen Media Research, the episode received 5.96 million viewers and received a 3.0 rating/7% share among adults between the ages of 18 and 49 marking a slight drop in the ratings from the previous episode, “Doomsday”. 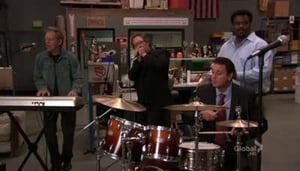