“Doomsday” is the sixth episode of the eighth season of the American comedy television series The Office, and the show’s 158th episode overall. The episode aired on NBC in the United States on November 3, 2011. “Doomsday” was written by Daniel Chun and directed by Troy Miller. The episode guest stars Ameenah Kaplan.

The series—presented as if it were a real documentary—depicts the everyday lives of office employees in the Scranton, Pennsylvania, branch of the fictional Dunder Mifflin Paper Company. In the episode, Dwight Schrute installs a Doomsday device that will fire all of the employees and effectively close down the branch if they make too many mistakes. Meanwhile, Gabe Lewis attempts to court the new warehouse worker, Val.

“Doomsday” received mixed reviews from critics, with some reviews critiquing the episode’s resolution. According to Nielsen Media Research, the episode was viewed by 6.15 million viewers and received a 3.2 rating/8% share among adult between the ages of 18 and 49, marking an increase in the ratings from the previous episode. The episode ranked third in its time slot and was the highest-rated NBC show of the night. 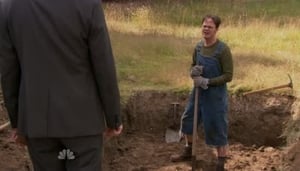