“The Incentive” is the second episode of the eighth season of the American comedy television series The Office. It was written by showrunner Paul Lieberstein and directed by Charles McDougall. The episode originally aired on the National Broadcasting Company in the United States on September 29, 2011.

The series—presented as if it were a real documentary—depicts the everyday lives of office employees in the Scranton, Pennsylvania, branch of the fictional Dunder Mifflin Paper Company. In the episode, after Robert California challenges the Dunder Mifflin staffers to double their sales, Andy Bernard, taking matters into his own hands, creates an incentive program. Eventually, he promises to tattoo himself if the staff doubles their sales, which they inevitably do. Meanwhile, Pam Halpert strikes up an unlikely friendship with Angela Lipton, both of whom are pregnant.

The episode introduces Sabre’s Pyramid tablet, a device that serves as a parody of several tablet computers, specifically the Apple iPad. The device would be explored later on in the season. “The Incentive” received mixed reviews from critics with many, including The A.V. Club reviewer Myles McNutt, mainly criticizing the episode for recycling stories. According to Nielsen Media Research, the episode was viewed by 6.7 million viewers and received a 3.5 rating/9 percent share among adult between the ages of 18 and 49, marking a drop in the ratings from the season premiere, “The List”. 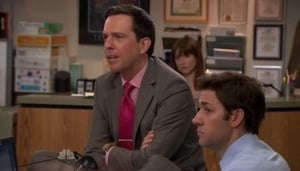