“Christmas Wishes” is the tenth episode of the eighth season of the American comedy television series The Office, and the show’s 162nd episode overall. The episode originally aired on NBC in the United States on December 8, 2011. It was written by executive producer Mindy Kaling and was directed by Ed Helms in his directorial debut. The episode guest starred Lindsey Broad, Ameenah Kaplan, and Eleanor Seigler.

The series—presented as if it were a real documentary—depicts the everyday lives of office employees in the Scranton, Pennsylvania, branch of the fictional Dunder Mifflin Paper Company. In this episode, Andy Bernard attempts to make everyone’s Christmas wishes come true, including those of a drunken Erin Hannon. Meanwhile, Dwight Schrute and Jim Halpert are entangled in an escalating prank war wherein one attempts to frame the other.

“Christmas Wishes” received mostly positive reviews from critics although The A.V. Club writer Myles McNutt slightly criticized the episode for losing its focus. According to Nielsen Media Research, “Christmas Wishes” drew 5.79 million viewers and received a 2.9 rating/8% share in the 18–49 demographic, staying even with the previous two episode, “Gettysburg” and “Mrs. California.” It ranked first in its timeslot, and was the highest ranked NBC series of the night. 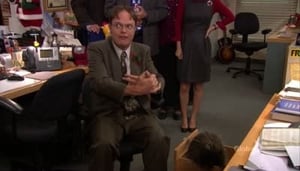