“The List” is the eighth season premiere of the American comedy television series The Office, and the show’s 153rd episode overall. The episode originally aired on NBC in the United States on September 22, 2011. It was written and directed by executive producer B. J. Novak.

The series—presented as if it were a real documentary—depicts the everyday lives of office employees in the Scranton, Pennsylvania, branch of the fictional Dunder Mifflin Paper Company. In the episode, Robert California stops by for the first time as CEO and leaves behind a mysterious list that has a line down the middle and every member of the office on either one side or the other. The office members frantically try to figure out what it means. Meanwhile, the new manager Andy Bernard faces a crisis.

“The List” was the first episode of The Office to feature James Spader’s Robert California in a starring role. The episode received moderately positive reviews with many commenting that it proved the series could survive without Carell. According to Nielsen Media Research, “The List” drew an estimated 7.63 million viewers and received a 3.9 rating/10% share in the 18–49 demographic, making it, at the time, the lowest-rated season premiere since the first-season premiere. 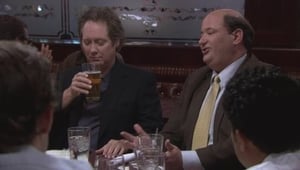