“Michael’s Last Dundies” is the twenty-first episode of the seventh season of the American comedy television series The Office and the shows 147th episode overall. It originally aired on the National Broadcasting Company on April 21, 2011. The episode was written and directed by co-executive producer Mindy Kaling. “Michael’s Last Dundies” guest stars Will Ferrell as Deangelo Vickers and Jack Coleman as State Senator Robert Lipton.

The series depicts the everyday lives of office employees in the Scranton, Pennsylvania branch of the fictional Dunder Mifflin Paper Company. In the episode, Michael Scott trains his office replacement, Deangelo Vickers on how to properly host the branch’s annual Dundie Awards. Michael soon learns that Deangelo has a terrible problem with speaking in front of others. Meanwhile, Erin Hannon deals with her dislike of her boyfriend, Gabe Lewis.

The episode—which was originally going to be called “Goodbye, Michael Part 1″—was the first installment in the series to be both written and directed by Kaling, who also portrays Kelly Kapoor on the series. The episode also marks the second appearance of Ferrell as Deangelo Vickers; Ferrell had originally signed onto the series to make Carell’s exit transition easier. The episode received mostly positive reviews from television critics. “Michael’s Last Dundies” was viewed by 6.849 million viewers and received a 3.3 rating among adults between the age of 18 and 49. The episode was the highest-rated NBC series of the week that it aired, as well as the sixth-most watched episode in the 18–49 demographic for the week it aired. 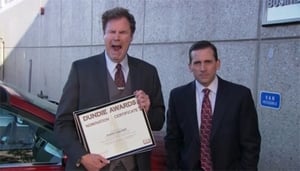